We were minding our own business when all of a sudden there were 8 humpback whales feeding right beside us. 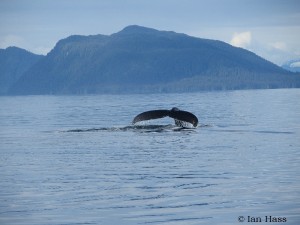 Yesterday was one of the most amazing days I have experienced yet aboard the Nautilus Swell. We started off our day diving basket bay, a site known for its abundant crabs and  fields of huge white plumose. Diving with our guests from Russia we saw a grunt sculpin, a giant puget sound king crab, 3 decorated warbonnets (2 chilling in the open on the reef) and some spectacularly coloured nudibranchs. As we cruised back to the boat, first mate Kevin pointed out a glistening hump in the water not too far off the bow of Inde. Too smooth to be a rock we got closer and realized it was a humpback whale. At a safe distance we gazed at this marine giant floating placidly at the surface, breathing gently out huge gusts of krill scented air. Up popped a smaller version of the same animal and then a couple more came to join. All of a sudden there were 6 or 7 of them all diving with their tails breaking the surface. A few minutes went by and we saw a ring of bubble trickle up. the surface of the water was suddenly broken by a huge open mouth as one of the whales came up through the bubble net to gulp down a healthy portion of krill. It was an amazing sight to see. Not long after, the whales slowly cruised out of the bay and we continued back to the boat where Hostess Amanda met us with hot drinks and Chef Jane had a delicious breakfast spread prepared. After breakfast we had another dive on the wall then Tim motored small groups of us up a near-by creek under a beautiful natural marble arch to a magical creek clearing. We slipped into the water with our snorkles, masks and fins to check out the Salmon hiding in the crevasses. We explored a cave where cool mountain water ran from an underwater spring, then drifted down and enjoyed the spectacular view from the water. This is where fairys would make their home if any live in Alaska. The forest of Sitka spruce and hemlock was a brilliant shade of mossy green and devils walking stick grew thick and lush in the undergrowth. The marble arch rivals any carving done by the masters in Europe with graceful lines and smooth water carved niches. Tim gave us a tow back to the boat where the guests were fed yet another delicious meal and we were off again in search of whales. As we were cruising along, captain Tim spotted some grizzly bears on the beach. We all piled in Inde for a closer look. There was a solitary male and a mother with three adorable fuzzy cubs frolicking on the beach. The male kept his distance, probably wisely, as he kept a warey eye on the protective mother. It was amazing to watch the bears turn over seemingly small rocks to get at the delicious treats beaneath them, only to realize those ‘small’ rocks were huge boulders they moved with an effortless bat of a paw. On our way back to the boat we stumbled upon yet another pod of humpbacks puffing their way along the channel. It was a spectacular day aboard the Nautilus Swell, above and below the water. Our guests on this trip have seen everything Alaska has to offer and I feel lucky to have been along for the ride!