He calmly stood up and paused for dramatic effect … ORCAS!!!! 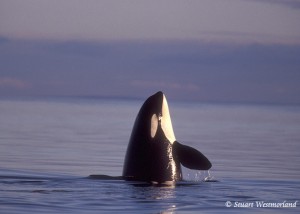 It was a beautiful afternoon and the Nautilus Swell was running at a brisk 8 knots with the ebb tide. we were pointed west heading for the Haida Gwaii, our guests were enjoying afternoon cocktails after a day of diving the wreck of the transpac and exploring Butedale. Jesse our divemaster then spyed something out the corner of his eye and a smile crossed his face. he camly stood up, walked down stairs and joined the guests in a calm low voice he said ” Now I dont want anyone to freak out but” … (pause for dramatic effect) …. ORCAS !!!! everyone freaked out , forgot their drinks and sprang into action , cameras clicked away and memories were made as a pod of the magnificent creatures turned and swam with us as we sailed west.