I gave my ethnobotany talk as we walked along pointing out various edible or medicinal plants at Butedale. 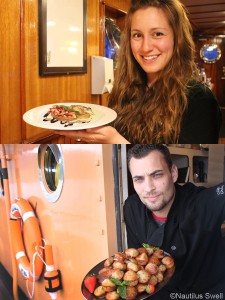 Today we pulled into Butedale. I was very excited to see Tiger and resident caretaker Lou but a couple new friendly faces were on the dock to greet us!

Cory, the new/stand-in caretaker introduced himself and his trusty hound Buddy. Buddy is a gorgeous mixed malamute/wolf/German Shepherd dog tied up in a bundle of shedding, licking, bounding, exuberance. Tiger, the large orange tabby cat also graced us with his presence, less excitable than his companion Buddy. Cory, their feeder and petting machine, was a mixture of the two.  Warm, welcoming with an easy laugh, he didn’t wiggle as much as Buddy, but gladly looked us in the eye, unlike Tiger.

Cory kindly offered to show us around and myself, divemaster Jesse and most of the guests decided to go see the generator, then hike up to the lake. The generator is hydro powered and at one point put out 800 watts. The two massive machines were built in 1939 and are still running smoothly, powering the basic needs of Cory and Lou when he is about. Lou wasn’t here as he had a small mishap in his boat, but plans on coming back soon. We headed up to the lake where we were treated with gorgeous panoramic views of snow capped mountains and a glassy smooth lake. At the edge we were at, the water was choked with huge old growth logs that had been cut but not used when the cannery was slowly abandoned. Some of the logs we were walking across were as thick or thicker than the Nautilus Swell’s smoke stack. Buddy decided things were a little too seriously calm and beautiful and decided to take it upon himself to liven things up a bit by barreling through the mud, splashing through the shallows, sprinting and slipping over logs and generally being a really, really happy dog. I can’t think of a better setting for this pooch. We located the old dam then started back. I gave my little ethnobotany talk as we walked along (something I learned a lot about at UVic during my undergrad time there) pointing out various edible or medicinal plants as we passed by, discussing the various traditional and contemporary uses the flora.

Afterwards we visited the old rendering plant where Chef Tim and I had a seriously competitive bowling match. The stakes were who ever lost had to make the cookies for the day… high stakes. I lost pitifully but I did so gracefully (or not so much) and made a batch of banana, peanutbutter, chocolate, white chocolate chip cookies… take that Chef Tim. Back on the boat we said goodbye to Cory, Buddy (who wanted to become the ships dog because of all the glorious galley smells) and Tiger, until the fall. Next stop, Haida Gwaii!