We hope the Swell can stand as an encouragement to those of us that are reaching the end of a season. Pause, set your intention and make sure you whoop and holler 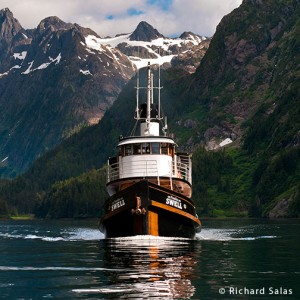 We’ve been saying allot of goodbyes lately. Being the Swell’s last season on the coast as a dive vessel, these moments present themselves quietly and provide good reason for pause. The Swell is a special thing. She’s provided a unique window into the layers of life that are an integral part of our coast. For the those that have been on board you know exactly what I’m talking about. Waking up to icebergs drifting on by, dancing with a Giant Pacific Octopus, or finning over an ocean floor covered in life are some of the moments that have been a regular part of life on board the Swell. I realize that I’m beginning to speak nostalgically, even whimsically, about the my experience on board the Swell, but take this not as an unapologetic plug but rather as a crew member who’s reflecting near the end of a unique opportunity.

In part, I’m speaking towards the opportunity of joining our guests on a dive and being one of those exuberant faces that surface from bellow. Whoops and hollers often fill the decks of Indie as divers high five and recall the highlights of the dive. It’s almost as if there’s a silent excitement that builds underwater until it’s released in a chaotic chorus of “did you see” and “amazing dive!”

I think the manner in which we approach people and the circumstances in front of us begins to change when we realize things are coming to an end. We become aware, almost intuitively, that the end often marks an experience more than the beginning. So, perhaps this blog, albeit brief, can stand as an encouragement to those of us that are reaching the end of a season. Pause, set your intention and make sure whoop and holler in between.